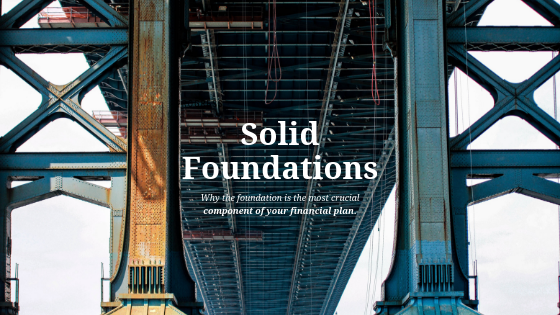 Solid Foundations: Why the Foundation Is the Most Crucial Component of Your Financial Plan

At the start of August, I took a little time off to go up to family cottage and build a 10' x 14' shed. Weeks prior I had been prepping the area, setting the "foundation" with stonecrete and a plate compactor on which the concrete blocks and eventual treated wood framing would sit.

Only after the foundation was solid and level did we consider building the shed.

So to goes personal finance. This week I had two different conversations with new clients where we were not talking about investments. Rather, we were talking about setting their foundations by removing debris (debt) before we could build the foundation (monthly spending plans and savings account of at least $1,000) on which the structure (retirement assets) would sit.

Yes, this takes time. Yes, this is not exciting. Yes, it makes you all a little different from your neighbors that are also living paycheck to paycheck and in debt!

All that said, take time to start with the foundation. Contact us to learn more.

"They are like a man building a house, who dug down deep and laid the foundation on rock. When a flood came, the torrent struck that house but could not shake it, because it was well built. But the one who hears my words and does not put them into practice is like a man who built a house on the ground without a foundation. The moment the torrent struck that house, it collapsed and its destruction was complete.” (Luke 6:48-49 New International Version).